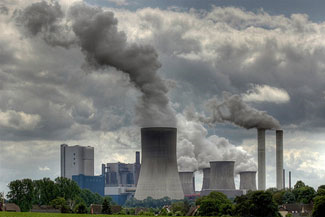 MCQs are mostly in a sequence. Care should be taken to spot out similar-looking answers. Learn how to differentiate them.

Greenhouse gases arise from a wide range of sources and their increasing concentration is largely related to the compound effects of increased population, improved living standards and changes in lifestyle. From a current base of 5 billion, the United Nations predicts that the global population may stabilise in the twenty-first century between 8 and 14 billion, with more than 90 per cent of the projected increase taking place in the world’s developing nations. The associated activities to support that growth, particularly to produce the required energy and food, will cause further increases in greenhouse gas emissions. The challenge, therefore, is to attain a sustainable balance between population, economic growth and the environment.

The major greenhouse gas emissions from human activities are carbon dioxide (CO2), methane and nitrous oxide. Chlorofluorocarbons (CFCs) are the only major contributor to the greenhouse effect that does not occur naturally, coming from such sources as refrigeration, plastics and manufacture. Coal’s total contribution to greenhouse gas emissions is thought to be about 18 per cent, with about half of this coming from electricity generation.

The worldwide coal industry allocates extensive resources to researching and developing new technologies and ways of capturing greenhouse gases. Efficiencies are likely to be improved dramatically, and hence CO2 emissions reduced, through combustion and gasification techniques which are now at pilot and demonstration stages.

Clean coal is another avenue for improving fuel conversion efficiency. Investigations are under way into super-clean coal (35 per cent ash) and ultraclean coal (less than 1 per cent ash). Super-clean coal has the potential to enhance the combustion efficiency of conventional pulverised fuel power plants. Ultraclean coal will enable coal to be used in advanced power systems such as coal-fired gas turbines which, when operated in combined cycle, have the potential to achieve much greater efficiencies.

Defendants of mining point out that, environmentally, coal mining has two important factors in its favour. It makes only temporary use of the land and produces no toxic chemical wastes. By carefully preplanning projects, implementing pollution control measures, monitoring the effects of mining and rehabilitating mined areas, the coal industry minimises the impact on the neighbouring community, the immediate environment and long-term land capability.

Dust levels are controlled by spraying roads and stockpiles, and water pollution is controlled by carefully separating clean water runoff from runoff which contains sediments or salt from mine workings. The latter is treated and reused for dust suppression. Noise is controlled by modifying equipment and by using insulation and sound enclosures around machinery.

Since mining activities represent only a temporary use of the land, extensive rehabilitation measures are adopted to ensure that land capability after mining meets agreed and appropriate standards which, in some cases, are superior to the land’s pre-mining condition. Where the mining is underground, the surface area can be simultaneously used for forests, cattle grazing and crop raising, or even reservoirs and urban development, with little or no disruption to the existing land use. In all cases, mining is subject to stringent controls and approvals processes.

Choose the correct letter, A, B, C or D.

Write your answers in boxes 1–6 in the comment below.

Write your answers in the comments below. I will publish the answers after that.